Hilton Head Island in South Carolina is a top travel destination in the US, and for more than 50 years, people have traded the big city life for the wide sandy beaches and meandering marshes of the southern coastline. Over the years, residential developers have each taken their shot at creating vacation paradise, complete with world class golf courses, top notch tennis, and lavish clubhouses.

As time marches on, repairs to these clubhouses are necessary, and in the process, building practices of the past are compared to innovations of the present, resulting in improvements to building strength, energy efficiency, and operation costs. In a world that is becoming more aware of the need to conserve natural resources, products and practices that reduce a buildings’ carbon footprint are in demand. Spray foam insulation is quickly becoming the “green” upgrade to traditional insulation for its ability to reduce energy use up to 40% in a given space, while simultaneously providing an air barrier, moisture barrier, and thermal barrier all in one application. Energy One America is a leading provider of energy efficient solutions, and over the past 12 months, we have worked closely with many Hilton Head area country clubs as they rolled out extensive renovations and improvements to their clubhouses, most recently the Sea Pines Country Club. 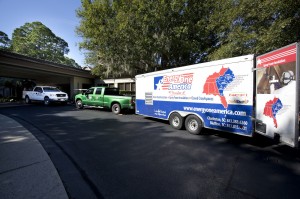 The original Sea Pines Country Club in Hilton Head Island, SC, was built in the 1950’s as part of the pioneering vision of Charles Fraser, a ground breaking developer who placed a priority on preserving the natural beauty of the Island. Because of Mr. Fraser’s steadfast focus, Sea Pines is viewed around the globe as a standard in environmentally friendly development, providing a high quality community lifestyle in a natural setting. As the current stewards of the Sea Pines Country Club improve amenities and infrastructure, the focus on remaining environmentally conscious is apparent as energy waste reduction and better air quality take center stage.

The current clubhouse was constructed in 1991, with improvements and additions taking place in 2001. As a result of aging HVAC equipment and suspect insulation, climate control became an issue, especially with large events of 200 members or more. Management decided to upgrade the air conditioning system, but the climate control issue persisted. According to Greg Clark, Chief Operating Officer, “We would cool the building way down the night before an event, but with that many people, it was tough to regulate the temperature in the room. The HVAC system couldn’t keep up.” Energy One America was called in to investigate. Energy One Sales Representative, Brian Thompson, and Jason Bayer, Field Operations Manager, found “fiberglass batts hanging loose from the attic roof and in some places insulation was missing entirely.” Even in places where the fiberglass batts were present, air was naturally moving in and out of the attic, effectively leaking conditioned air out of the building while allowing hot summer air in, creating the equivalent of feeding one hundred dollar bills into the a/c unit only to watch them float out of the roof each month. As part of this air flow give and take, airborne pollutants like pollen and dust were infiltrating the attic, degrading the air quality of the clubhouse. Brian recommended closed cell spray foam insulation, well known for the ability to seal air leaks while providing high insulation value. Because closed cell spray foam expands to fill a targeted space and cures to an extremely dense and rigid form, it has the added benefit of strengthening the target structure up to 300%, a fact not overlooked by Greg Clark, who chose the product for its dual benefit of saving money while adding strength to the club’s roof. With an estimated 25%-30% reduction in heating and cooling costs, the insulation upgrade is projected to pay for itself over time, and according to Director of Maintenance, John Stanton, “The electric bill budget going forward has been dropped in anticipation of the energy savings.” 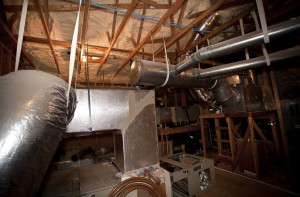 He has good reason to expect the boost to the bottom line. Before signing on for the insulation upgrade, Sea Pines management contacted the nearby Moss Creek Country Club to find out how spray foam insulation had improved their energy costs. Moss Creek, like Sea Pines, was a ground breaking community with forward thinking developers, who built the community “off island”, just over the bridge from Hilton Head. They used the natural landscape to sculpt a lifestyle for everyone, including a full service equestrian center, two Fazio golf courses, access to the intercoastal waterway for boaters, and competitive tennis as its core member activities. In August of 2011, Energy One America installed open cell spray foam across the entire roof of the Moss Creek Clubhouse. Similar to closed cell, open cell is excellent for sealing air leaks while providing a high insulation value. In contrast, open cell cures with millions of microscopic air cells, and is spongy to the touch. While it provides less structural strength, open cell spray foam is a leading soundproofing insulation. Pinckney Crosby, Facilities Manager at Moss Creek, had this to say about the installation at the Clubhouse, “The day they installed the spray foam there was an immediate effect inside the clubhouse. As they moved across the attic, the temperature dropped across the clubhouse. Today the attic is the same temperature as the conditioned space below, and the climate in the clubhouse is more consistent, where before we had hot and cold spots.” As for the savings to the bottom line, power usage was down in 2012 over 2011 and Moss Creek saved up to $1500 a month in the peak usage months.

Another world renowned Hilton Head Island development, Long Cove Golf Club, revered for its southern charm, gorgeous marsh views, and award winning Pete Dye Golf, is completing an extensive renovation and expansion to its clubhouse, and spray foam insulation has been included as the green replacement to the existing fiberglass system. Only the best will do for this long standing patriarch of Hilton Head Island, its Pete Dye golf course named to the World’s Top 100 for almost 30 years running, its clubhouse walls adorned with countless plaques and trophies engraved with past and current tournament winners, hole-in-one shots, and club champions. Ken Hart of Chambers Architects was the driving force behind the switch to spray foam insulation, and had this to say about the renovation, “The current fiberglass insulation, because of moisture or for some other reason, had dislodged and was hanging down and providing no insulation value. In other areas, insulation was completely missing. When we looked at the project as a whole, it didn’t make sense to reuse a product that had failed after 30 years of use. We need an insulation that will last over time, and spray foam insulation provides that. The long term benefits outweigh the extra cost, in that we are able to use the density of spray foam to achieve one acoustical value across the treated space, gain a thermal and moisture barrier, and add strength to the existing structure.” When the clubhouse reopens later this year, the members of Long Cove Golf Club will enjoy all the added benefits of spray foam insulation and will take pride in knowing their homeowners dues aren’t flying out of a leaky roof.

As concerns about clean air and energy efficiency continue to grow, expect more and more Southern Country Clubs and their homeowners to embrace spray foam as the insulation of the present, and the future, in one application.