Energy One America is proud to be the spray foam installer entrusted to insulate the $100 million addition to the 5 star Palmetto Bluff Inn located in Bluffton, SC.

BY ERIN LAYTHAM LENTZ
Special to the Bluffton Packet
July 14, 2015 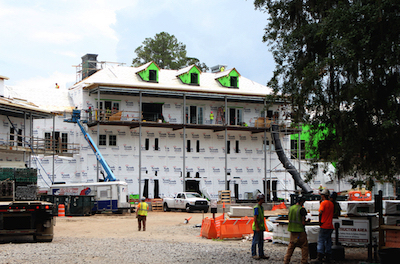 The accolades keep piling up for the upscale Inn at Palmetto Bluff.

One may ask, what else could the award-winning resort do to top that success?

Currently, 50 cottages and 30 village homes offer spectacular views of inland waterways and water taxi service to Old Town Bluffton and Harbour Town. The inn has been named one of Travel & Leisure’s “Top Romantic Hotels” in the world. It also was recently named first on the magazine’s list of best resorts in the continental U.S. and has AAA’s Five Diamond award, among other honors.

Now, work is underway on adding 150 rooms as part of a $100 million expansion. The new hotel, a three-story Lowcountry-style inn, will offer more meeting space, new restaurants and a spa with 13 treatment rooms.

The expansion began last fall, and the first phase will be completed in January. The hotel is scheduled to be finished in September 2016.

“We will be able to attract different types of business we haven’t been able to before …” says Craig Schoninger, director of sales and marketing for Montage.

“We’d like to attract bigger groups and will be able to accommodate them.”

The May River sets the scene for Palmetto Bluff, a 20,000-acre luxury waterfront community that boasts a conservatory, equestrian center, a Jack Nicklaus golf course, kayaking, boating, fishing, dolphin watching, a shooting range, tennis, croquet, shopping, restaurants and a spa for its residents and guests.

The property originated with 12 plantations going back in history to Paleo-Indian times. Guests are encouraged to learn about and become part of the rich history.

The spa is equipped with six treatment rooms, a mani/pedi facility and a menu of treatments such as the popular, mineral-rich “Pluff Mud Treatment” that was formulated with the area’s resources. Guests may also opt for custom, in-room treatments in the spacious cottages equipped with soaking tubs and steam showers.

“We want to be open and welcome the community,” said Christine Wrobel, public relations and marketing manager.

The resort just launched a “Local Loyal Rate” in which local residents can stay and experience the inn starting at discounted rates of $249 per weekday and $299 per weekend — about half the regular rates.

Those guests can dine at The Canoe Club, one of the restaurants opened for members and guests only.

The River House and Buffalo’s are open to the public, as are many of the community-sponsored charity events and concerts held throughout the year.

For any visitor, it’s easy to observe the standard of excellence, from the moment of arrival at the gate to leaving the community.

“Once hired, there is training in which we instill the values and culture of the organization,” Schoninger said. “Associates are immersed in who we are and the experience we are trying to give our guests daily.”
The inn expects to add many more employees with the expansion.

“Our goal is to be the employer of choice,” Schoninger said. “We want to attract and entertain the best in the area and grow our family.”

New Report – 90% of U.S. Homes Are Under-Insulated
Scroll to top